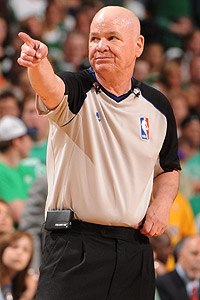 I have had the privilege of knowing ‘Joey Crawford’, one of the NBA’s most recognizable and (mostly) beloved refs ever since he moved his daughter, Amy into our freshman dorm at Boston College over twenty years ago.  Attending NBA games where he is reffing is always a ‘theatrical experience’ as surrounding fans are never lacking in an opinion on Joe’s calls.  Upon watching him ref a recent game in Portland in the Playoff Season, I realized he would be a perfect leader to profile in my forthcoming book, The Suite Spot.

When I spoke with Joe he was preparing to fly to New Mexico to receive the highest referee award—the 2014 Gold Whistle Award. This award is given to one referee a year based on their impact in the national community and how much they give back to the game of officiating. Joe was still in disbelief that he had earned this award as he recalls being in awe of the prior recipients. Joe reflected on the fact that he speaks to many, many groups but preparing for this acceptance speech felt particularly daunting:

On Leadership:
“In the officiating world, when you get to where I am—you have been very, very lucky and worked the top NBA games. It’s easy to lose perspective about the impact you are making because you get so insulated in the community of the NBA itself. However, recently, I was coaching a group of kids down in Lafayette, LA and we stopped into a pizza joint after a long day. Two guys walked up to me and very excitedly explained that they were local referees and that they had been watching me ref games for years now. They went on and on about how much I meant to them as a mentor.
This admission just blew me away and reinforced to me the responsibility I have to refs like those guys in Louisiana to be a role model. It can be all-encompassing when you are traveling with your crew—you spend the days leading up to a game watching tape, in meetings, doing everything you can to study the players and making sure you are going to be totally ready to give the game your absolute best. I try to convey this responsibility to the refs around me that it’s not just about a game—it’s about our bosses, the NBA, the millions of fans watching your every move. And the challenge is not to go overboard trying to be perfect. Everyone thinks you are so imperfect—that you try to overcompensate by being ever so cautious about your every move.” 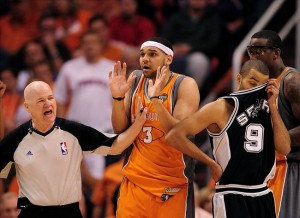 On Passion:
“There’s a guy named Al Battista who acts a referee observer at our games. One day, a bystander commented to Al, “I am a 25 year ticket holder and I just love watching Joe Crawford . He really does his job. And he exudes passion.”
I was so taken aback by this admission, Katie—because that’s all I really want to do—share my absolute love for this game. Do I want to be a perfect ref? Of course—but that’s not possible—but I can spread my love for this game.”
On Legacy:
“For other Refs to say “I could put this guy on any game and he worked well with people and helped make them better.” It can be such a negative profession—having to constantly hold people accountable for their behavior—that the challenge can be remembering how to make a positive impact.
By April, we have reffed about 75 games and we are about to head into the playoffs—the crew is beyond exhausted. And I can just see the younger refs wondering, “What’s Joe going to talk about now?” in our pre and post game debrief meetings. I am really driven to get everyone around me to perform and that isn’t always what everyone around you wants to be doing—that’s where I really serve.” 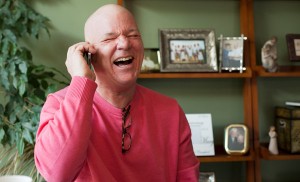 What drove you?
“Here’s a perfect story to sum that question up—I was finishing up my 8th grade Catholic School Year with about 60 kids in my class. I was a mediocre student, but Sister Joanne announced, “We are giving the ‘Effort Award’ to Joseph Crawford because he works hard and has a low IQ!” I thought to myself, ‘hey, I am proud as hell!” I could not wait to get home that afternoon and yelled to my mom, “Hey, ma, I got the Effort Award—look at this!” She took one glance at the description and yelled, “You down have a low IQ!” and I said to her, “What’s an IQ?” Ha!!!!
The point being—I knew I would never be the top student—but I realized very early on that if I worked hard at whatever was important to me—I would be able to get far enough in life. My dad was a baseball empire and I wanted to follow in this footsteps but I had no idea it would turn out so good. I got to marry the woman I always wanted to and I get to share my love for the game of basketball with my incredible three daughters and growing list of grandchildren—I am a truly blessed man.”

Thank YOU Joe Crawford and congratulations on receving the Gold Whistle Award next week!!